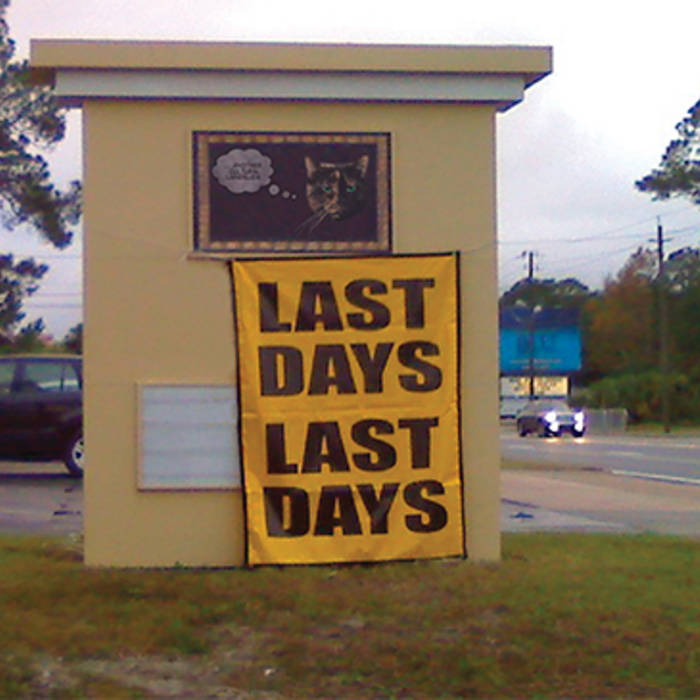 In March of 2009, after slamming through the writing & recording of "hey… that's not a Tootsie® Roll…" in less than 9 days, we felt it would be really nice to just ONCE take a little more time making our next album...

Not long after making that decision, as kirk was leaving the day job, he turned to his left and saw the sign pictured on the front cover. For some reason, he pulled out his crummy work phone, took the picture, went home, showed it to wendy - and we immediately knew the name of our next album. (And hey - now we even had a picture for a digitally downloadable book! Ooooo! Fancy!)

And that's ALL we knew about "last days last days."

In April 2009 we went back into the studio & started writing the songs for "last days last days;" hell, we even had a bunch of songs already written. We thought that making this album would take us around... oh, 3 months. At most.

Four years later, here it is.

Following up on our founding principles (no two songs alike - ever; music should be a journey, not a destination; and the music always comes first), we had no idea what we would do. We just... Did It. And we only kept the songs that felt right - the end result being two of the songs we started with, and throwing out over 120 other songs we had written along the way.

And not until we finally started putting together a track order did we discover that we had done the stupidest thing a band can do in The Age Of Single Downloads: we’d made a gapless, themed concept album - 15 or 16 Songs About Fear, Uncertainty, Doubt, Despair, Anger & Alienation. Y’know - Happy Stuff. And all of a sudden, that became the album’s subtitle - and it’s theme.

But why that theme? What the hell was motivating all of this?

We still don’t know; all we know is that the world we live in today has become cruel, unthinking, unfeeling & downright nasty; each of those things in the album’s subtitle brought to a fever pitch; each masterfully manipulated & motivated by Fear. Fear of Change. Fear of others. Fear of being left out. Fear of growing old. Fear of the Last Days. And we all need to do whatever we can just to get this world to Wake The Fuck Up.

This album is our way of fighting back.

The rest is up to You.

Go out & make a difference.

the narrative found-sound clips used in "apathy" came from "Right or Wrong? (Making Moral Decisions)," a 1951 Coronet Instructional Film in the public domain, and made available through the absolutely awesome Prelinger Archives (archive.org/details/prelinger), whom we humbly thank for their hours of astounding ephemeral films (check 'em out!)

the monkeys in "monkey" all came from freesound, an amazing collaborative database of Creative Commons Licensed sounds. (www.freesound.org) the wonderful contributors were:

in "a meditation on the impending zombie apocalypse," there are women screaming at the beginning; since wendy can't scream, freesound again came to the rescue:

and we can't forget lonemonk's wonderful audience reaction we used in "and a 21st century lullaby":

all other words & noises only slightly resembling music on this album were written, performed, recorded, fussed over, recorded again, fussed over some more, thrown out, recorded yet again and eventually wrestled to the ground, produced, mixed & mastered by kirk & wendy, aka another cultural landslide.

this album has been released under a Creative Commons Attribution 3.0 Unported (CC-BY-3.0) license by another cultural landslide blah blah woof woof god bless our overly litigious society please feel free to share this music with anybody & everybody

we would like to thank rob stewart of broken promise keeper (www.brokenpromisekeeper.com) for his excellent advice on how we could vaguely make something that only slightly resembled a powerpop song on "monkey"

we would like to thank andrew dubber (andrewdubber.com) for listening as we spouted our incredibly off-the-wall ideas of what we feel needs to change in music and how we want to do it - and for not immediately thinking we were insane, but were instead just troublemakers

we would also like to bow down & kiss the feet of rachel sclare - who not only took our stupid ideas for album & poster artwork & actually made them into something wonderful… but also did it all for free because she likes us; but then the thought of us bowing down & kissing her feet kind of grossed her out, so we'll just say: Thank You, Rachel.

finally, we would like to thank You - our listener. you make this all worthwhile. it is our fondest wish that somehow, in some way, we've made you smile.

p.s. in case you missed it earlier, mzkitty sez hi